Former Prime Minister Atal Bihari Vajpayee, said this in a function held for Pakistani poet Hafeez Jullundhri in Delhi. The entire crowd including Hafeez who wrote the National anthem of Pakistan was moved. What’s interesting is that this was said by one of the tallest leaders of the Indian right and what’s even more interesting is that he would have been abused and called an anti-national had he said this today.

Karan Johar’s Ae Dil Hai Mushkil is making a lot of noise of late. While many like me are appreciating the music, the excellent chemistry between Ranbir-Aishwarya and eagerly looking forward to the film, there is another lot which is demanding a boycott/ban of the film and the regional party of Maharashtra, MNS is threatening to break the multiplexes if it is released (As I write this, there has been a truce). The reason being a ‘cameo’ by Fawad Khan in the film who is a Pakistani and this comes under the wake of Uri attack by Pakistan where more than 17 Indian soldiers were martyred.

There has been a lot of debate going on and I have had heated discussions on Twitter and Facebook where many support the boycott/ban while many agree with me and are against the same. People are now giving certificates of patriotism and nationalism depending upon which side you are on. I have serious ideological issues with this and I couldn’t help but write this post.

I read a dramatic post recently, where the author argued that Bollywood had remained silent on the Uri attacks. I was frankly quite amused when I read this argument. Terrorism is one of the gravest issues that we face as human beings and we often read about our soldiers getting martyred in sensitive areas like Kashmir and the North East. We also read about the riots that happen in various parts of the country and there is never a day when we don’t read about rape of girls. Precisely, there is a lot of wrong that’s happening around us. But when did it become a norm that we HAVE to tweet or talk about it to earn our certificate of patriotism and if we don’t then it means we don’t love our country and army? A quick introspection would tell us that we haven’t criticized or condemned every attack that took away the life of our soldiers but that does NOT mean we don’t care for them or are not patriotic enough. The same people sometime back argued that the PM cannot speak on all issues (Dadri or Gau Rakshaks) but that doesn’t mean he approves them. How times change! Every Indian irrespective of the political ideology, feels bad at the sight of dead bodies of soldiers wrapped in tricolor and every Indian acknowledges the immense contribution and sacrifice they make to keep us safe. No one, I repeat, no one should question that. We all love India. PERIOD! 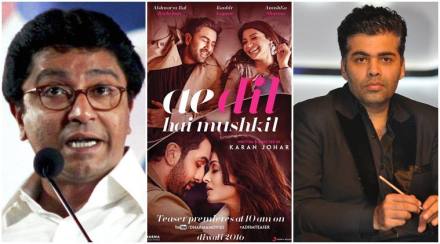 Many jingoists have made the argument of ‘economic isolation’ while trying to justify the banning of Pak artists but as they make this argument, India continues its exports and imports with Pak and the Indian businesses continue to trade with Pakistan. India has neither sent back the Pak High Commissioner and nor has it called its Commissioner back. So, why should only artists bear the brunt? As artists rightly say, they are easier targets. I would have happily supported the ban if it helped us in controlling terrorism but we all know that this makes absolutely NO difference. More so, when trade and commerce is going on as usual! I also cannot fathom what on earth means keeping ‘India first’. Because if a Pakistani actor acts in a film, your country becomes second? Who peddles this non sense?

A boycott/ban will hurt Indians

Though people have made noises about banning the film, thankfully there hasn’t been a ban on the film and while boycotting a film is well within the rights of every individual and everyone is free to do it but it makes little sense. Barring an actor or two from Pakistan, majority of the cast & crew of the film is Indian. If the film doesn’t do well because of the boycott then it affects only Indians who have put in their heart, soul and money in the film. The producers, exhibitors, studio all lose money because of this. Why would any ‘patriotic’ Indian want to do this to fellow Indians? The movie is backed by Fox Star which is a joint venture between 20th century Fox and Star. At a time, when our government is trying to get foreign investments what message do we want to convey to a studio like 20th Century Fox who is investing in India and other potential investors? Doesn’t this hurt the country?

Karan Johar is not a hypocrite

I was deeply disappointed when Karan Johar came up with that video justifying his patriotism and saluting the armed forces. No one should be asked to prove his patriotism and it’s a pity that he had to do so. People who till now had been asking for him to speak up brushed this aside as drama but they were happy that they had ‘won’. As someone who has crores riding on a film and with goons threatening to stop the release of your film, what other option you have but to bow down? It’s easy to sound idealistic and say that he shouldn’t have done this but practically speaking, maybe I would have done that too. When you know that the state cannot protect you, what other option you have? And yes, he is a businessman at the end and he has to save his film!

The Chief Minister of Maharashtra recently arranged a meeting between Karan and MNS. It was agreed that producers will not cast any actor from Pakistan in future, producers who already have Pak actors in their films will pay 5 crores to Army Welfare Fund and Karan Johar will have a disclaimer before the film that pays homage to the martyrs of Uri. More than angry one feels sad about the state of affairs in this country and it sets a dangerous precedent. Tomorrow, any Tom, Dick and Harry under the garb of nationalism will threaten anyone and will even get away with the non-sense because it’s a new fad now. It is still not a crime to work with Pak actors in India. MHA has not denied visas or issued any advisory that prohibits anyone to work with them. MNS with zero authority in the state of Maharashtra acts like a Goonda extorting money from the producers and what’s pathetic is that the producers association even agrees to this crap. Running a disclaimer before the film honoring the martyrs is also good but I have a problem here because this is FORCED nationalism. Why on earth should anyone be doing this? I am no expert here but I believe that this could have been totally avoided had government taken a strict stand.

I strongly believe that people should be free to work with anyone they want to work with and ADHM and all other films which have Pakistani artists should be released peacefully. But this doesn’t make me any less Indian than the hyper nationalists and it’s high time we stop this stupidity.

India is one of the world’s largest democracy. This was achieved after a lot of sacrifice and our freedom fighters have laid their lives to ensure that we live in a ‘free country’. Though we are not a perfect country when it comes to freedom of speech and expression but we are in a much better space when we compare ourselves to China, Pakistan, Korea and many other countries where the rights are hampered. We should value the freedom that the architects of this nation gave us and we should strive to strengthen them with each passing day.

What better way to end the post by quoting Tagore:

Where the mind is without fear and the head is held high;

Where knowledge is free

Where the world has not been broken up into fragments

Where words come out from the depth of truth;

Where tireless striving stretches its arms towards perfection;

Where the clear stream of reason has not lost its way

Into the dreary desert sand of dead habit;

Where the mind is led forward by thee

Into ever-widening thought and action;

Into that heaven of freedom, My Father, let my country awake